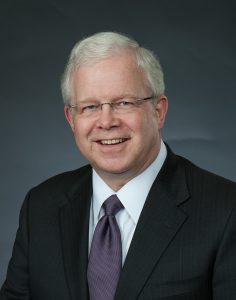 Dr. Ronald L. Hopping is a Therapeutic Optometrist and an Optometric Glaucoma Specialist. He is an honor graduate of Southern California College of Optometry, as well as Kenyon College in Ohio, and received the Honorary Degree Doctor of Ocular Science from the Southern College of Optometry. He also earned his Masters in Public Health from the University of Texas. Dr. Hopping is a Board Certified Diplomate of the American Board of Optometry. His specialty is contact lenses and adult eye health and vision correction. His excellence in contact lens skills was recognized by the American Academy of Optometry when he was awarded the distinction of Diplomate in Cornea and Contact Lenses, one of 13 in Texas and 149 in the world. Dr. Hopping is a past president of the Texas Optometric Association and has been a member of the American Optometric Association since 1974. In June of 2012 Dr. Hopping assumed the presidency of the American Optometric Association. He has served on many national committees in the areas of legislation, contact lenses, sports vision, communications, practice management and public health. Since 1980, Dr. Ronald Hopping has been a Fellow of the American Academy of Optometry. Additionally, he is nationally recognized as one of 150 Distinguished Practitioners of Optometry by the National Academy of Practitioners. He was appointed to the Texas Board of Optometry where he currently serves as Vice Chair.

You can schedule your next eye exam with us online!

Leave Us a Review

Please take a moment and let us know how your experience was.

Let's continue the conversation over on your social network of choice.